Noel Gallagher's Tales From The Middle Of Nowhere (Vol.2) Part Seventy One 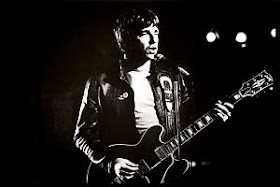 From Noel Gallagher's 'Tales From The Middle Of Nowhere' tour diary.

Yes comrades. . . been a long time. Been on my holidays see? Very nice it was too. Went to a place called Spain. Mallorca to be precise.

So . . . as I remember the last time we spoke I was just about to play at that Edinburgh Castle? The show was pretty good as I remember it. Didn't rain anyway which is always a bonus up in Scotland (which is where Edinburgh is!).

Now after that we had a few days off. Then flew to Japan for 72 hours to do that festival Fuji Rock. Very good it was too. It didn’t rain there either which might be the first year that's ever happened. Managed to stay on English time so didn't feel too bad at all. I almost enjoyed it!!!!

As I was sleeping all day and up all night I managed to catch that Olympic opening ceremony which was on Japanese tv at 6:00 in the morning. Very psychedelic. Didn't see it all mind. How long did it go on for? 9 hours or summat? Good though eh?

Arrived back in old England and because I'd stayed on UK time guess what? NO JET LAG!!!!!!!!! Unbelievable. I'm definitely trying that next time I'm over there (whenever that'll be I don't know!).

Anyway . . . after that me and Team NG legged it to Spain for a week or so. Needed it to be honest. Nowt like sitting in the sun. When we got back to old England we'd managed to blag some tickets to that last Saturday at the Olympic stadium. Now I've been to the biggest sporting events on the planet and I've done some monster shows but to be in that stadium and feel the noise and witness the fitness of the great Mo Farah was simply incredible. I have to say when the toffs what run our country started spouting waffle about the Olympics and how it would bring out the best in us blah, blah, blah I was - like most of us I expect – thinking "oh fuck off!" and I've never been one for that last night at the proms bollocks (it's the Celt in me see?) but I have to say they were right. You couldn't fail to be moved.

Saying that - thank God the football's back. I was up at the pre-season kickabout that is the Charity Shield between God's own team and some other mob called "Chelsea". We won. In style. Looked awesome. I'm very excited about the new season as this tour finishes in November, which means I'll get to see most of it!!!

Now . . . that brings me to Wednesday night. Did a little acoustic gig for that charity Warchild at that little club in Camden called Dingwalls. Great night. Rowdy as fuck. Could barely hear myself think!

Which brings me to today and the here and now. You find me in the great city of Vienna in the great nation of Austria. Back on the festival circuit. Not sure how any of the songs go now. I'll have to wing it.

Keep up to date with Noel's award-winning tour diary by signing up to Noel's Official Website's Inbox here.